Posted by Prakash Consultancy Services at 21:25 No comments: 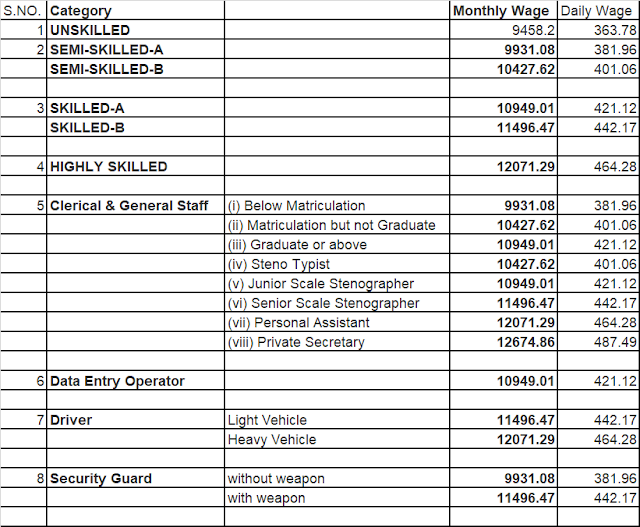 Introduction Of Auto Renewal System In The State Of Haryana

The State Government of Haryana vide Order no 9439 has introduced the auto-renewal of the licenses under rule 29 of The Haryana Contract Labour (Regulation & Abolition) Rules,1975 read with section 13 (31 of The Contract Labour (Regulation & Abolition) Act, 1970 and under rule 14 of The Haryana Inter-State Migrant Workmen Rules, 1981 read with section 9 (3), 35 (2) (d) of The inter-State Migrant Workmen (Regulation of Employment and Conditions of Service) Act,1979.

As per the notification, the auto-renewal has been approved subject to the following conditions:-

(1) The duration of renewal of licenses procured via auto-renewal online system would remain the same as being provided at present as per the Act, which is one year.

(2) The provision of auto-renewal will be applicable only in cases where there is no change in the desired fields i.e. name of occupier, name, and address of the factory or establishment, maximum no. of workers except the year/years, etc. from the previous licenses. Whenever there is a change in any condition or the requirement in the previous license then in such case the process of online application for renewal will be followed.

(3) The fees for auto-renewal have to be deposited by e-GRAS through the website of the Labour Department i.e. https://hrylabour.gov.in/. If the requisite fees are not deposited via e-GRAS and any other method like treasury challan or e-challan is adopted then the usual method of online renewal will be followed

Introduction Of Auto Renewal System In The State Of Haryana.pdf

Posted by Prakash Consultancy Services at 18:52 No comments:

The State Government of Telangana has introduced the approval of new factory plans and existing factory revised plans through online mode and sending messages to the Factory Management on the status of approvals.

1. Approval of new Factory plans and existing factory revised plans through online and sending messages to the Factory Management on the status of approvals.

2. Grant of Licence, Amendment, and Transfer of factory Licenses through online and sending messages to the Managements on the status of the grant of Licenses.

3. Payment of Annual Licence fees up to 10 years made through online and sending messages to the factory management for making payments of Licence fees.

Posted by Prakash Consultancy Services at 18:43 No comments:

The Election Commission Of India has notified 3rd November 2020 as the date on which bye-election to the Rajarajeshwari Nagar (RR Nagar) and Sira Constituencies in the State Of Karnataka is scheduled to be held. Now, the Government of Karnataka, Labour Department vide. its circular dated 9th October 2020 has directed employers of Shops, commercial establishments, Factories, and other Establishments to declare for every employee working therein whose name is included in the electoral roll of the two assembly constituencies where the bye-election is to be held on 3rd November 2020, to be allowed on the polling day, a day's paid holiday to enable them to exercise their franchise.
This circular has been issued under Section 3A of the Karnataka Industrial Establishments National Festival Holidays Act, 1963 inter alia covers shops, commercial establishments, factories, etc.
The circular further states that employers found in violation of the above said provision, shall be penalized under the Act. Further, vide. Circular dated 16th October 2020, the Factories, Boilers, Industrial Safety And Health Department has also issued similar directions declaring paid holiday for workers of factories in the State who are enrolled as the voters in the above said constituency.
Therefore, Employers of Shops, Commercial Establishments, Factories and other establishments in Karnataka are highly advised to comply with these directions issued by the Labour Commissioner and to declare paid holiday to their employees who are registered voters in the said bye-election to the two assembly constituencies in the state
Notification
👇
The Karnataka Shops And Commercial Establishments (Amendment) Act, 2020
Posted by Prakash Consultancy Services at 11:02 No comments:

The Government of West Bengal vide circular No. Labr./210/(LC-IR)/3C-01/18 has issued guidelines to be followed by all employers and employees of the state covered under the Payment of Bonus Act, 1965 (''Act'') while settling the legitimate dues of the workers in respect of bonus for the year 2020 in terms of the said Act in the interest of maintenance of Industrial peace and harmony,:-

(2) All establishments where the bonus was paid in the previous year are requested to see that the rate of bonus payable this year is not lower than that of last year. Employers are also requested to consider payment of an amount of exgratia in lieu of bonus as is admissible at the maximum stage to those employees who have crossed the eligibility limit as per the Act

(3) All employees, whether in casual employment/re-employment after retirement/employed through contractors and have worked for not less than 30 days during the year should be paid a bonus

(4) The employers in default towards payment of bonus for the previous year are requested to make such payments this year along with the bonus for the current year.

(6) The Government has noted that in many cases, in previous years, employees of the IT sector, Hotel and Restaurants, Shops & Establishments, Security Workers, and some workers in jute mills did not get any bonus. It is hoped that the situation will not be similar this year.

(7) All payments of bonus should be made before the commencement of Durga Puja, 2020.

Even employers in an unorganized sector where most employees are not covered under the Act are expected to pay bonus/ex-gratia to their workers before the commencement of Durga Puja, 2020.

Hence, all employers having their establishments in West Bengal may make note of the above guideline and comply accordingly

Notification:- 👉 Guidelines To Settle The Legitimate Dues Of Workers Under The Payment Of Bonus Act, 1965 In West Bengal

Posted by Prakash Consultancy Services at 16:32 No comments: 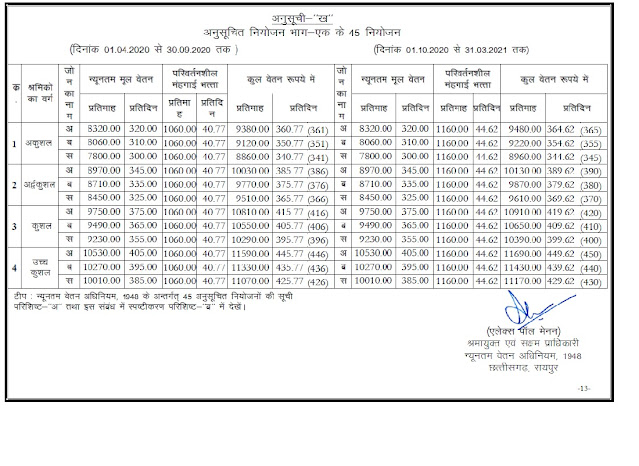 Posted by Prakash Consultancy Services at 11:11 No comments:

The Labour Department of Madhya Pradesh State has revised the minimum wages of several categories, which is valid from 1st October 2020 to 31st March 2021.