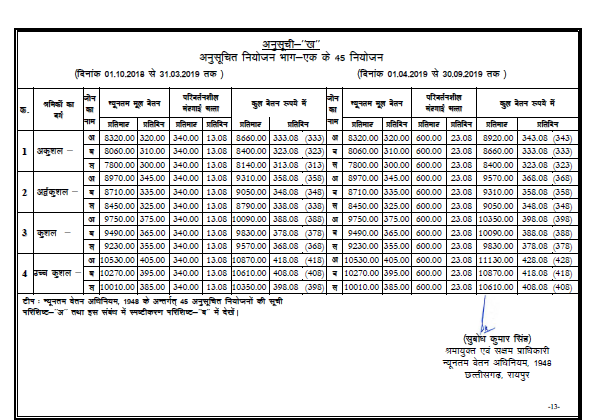 Karnataka Minimum Wages are declared for the Year 2019-2020

Supreme Court Judgement regarding PF contribution on all allowances

The recent judgment passed on 28.02.2019 by the Hon’ble Supreme Court in the matter of Regional Provident Fund Commissioner Vs. Vivekananda Vidyamandir and other connected appeals considered the scope of ‘basic wages’ and allowances liable for PF contributions. The said judgment is published under the caption Surya Roshni Ltd.& Ors. vs. The State of Madhya Pradesh EPF RPFC and Ors. 2019 LLR 339 (SC).

It’s nothing new; our Apex Court has just reiterated the 1963 verdict (Bridge & Roof Case, 1963 SC). Misunderstanding of most of the employers in India should take a wake-up call now. Till this 28.02.2019, what makes up basic wages was not very clear and the employers were at crossroads. Now, the Supreme Court has the paved way the employers to cross the bridge. The issue emerged particularly after the judgment given by Madras High Court in the case of Management of Reynolds pen, Madhya Pradesh High Court in Surya Roshni Case and of course, Vivekananda Vidya Mandir Case in Calcutta High Court. This judgment waited since from 2011.

It is a hammer knock on the Head of the stakeholders in the employment scenario!!! Also, has given caution to all!!

The position of law has been discussed in paragraph 8 to 14 of the judgment delivered by the Hon’ble Supreme Court in Surya Roshni case (supra). However, paragraph 14 contains the crux and the operative part of the judgment, which is reproduced under:
‘
14. Applying the aforesaid tests to the facts of the present appeals, no material has been placed by the establishments to demonstrate that the allowances in question being paid to its employees were either variable or were linked to any incentive for production resulting in greater output by an employee and that the allowances in question were not paid across the board to all employees in a particular category or were being paid especially to those who avail the opportunity. In order that the amount goes beyond the basic wages, it has to be shown that the workman concerned had become eligible to get this extra amount beyond the normal work which he was otherwise required to put in. There is no data available on record to show what were the norms of work prescribed for those workmen during the relevant period. It is therefore not possible to ascertain whether extra amounts paid to the workmen were in fact paid for the extra work which had exceeded the normal output prescribed for the workmen. The wage structure and the components of salary have been examined on facts, both by the authority and the appellate authority under the Act, who have arrived at a factual conclusion that the allowances in question were essentially a part of the basic wage camouflaged as part of an allowance so as to avoid deduction and contribution accordingly to the provident fund account of the employees. There is no occasion for us to interfere with the concurrent conclusions of facts. The appeals by the establishments therefore merit no interference. Conversely, for the same reason the appeal preferred by the Regional Provident Fund Commissioner deserves to be allowed.

The above Judgment has many mixed views across India .Many queries are coming up seeking guidance for restructuring the wages packages/CTC of their employees. It is apprehended that the PF Deptt having the recent judgment at hand, are likely to increase their inspections and audits in order to recover the additional PF contributions along with interest and damages for delayed contribution in respect of such establishment where rationale behind giving such allowance is missing.

Before adverting to the principles laid down in the above judgments, it has become necessary to set out the relevant provisions of the Act for purposes of the present controversy. Section 2(b) of the EPF & MP Act, 1952 reads as under:

“Section 2(b) “basic wages” means all emoluments which are earned by an employee while on duty or on leave or on holidays with wages in either case in accordance with the terms of the contract of employment and which are paid or payable in cash to him, but does not include— (i) the cash value of any food concession; (ii) any dearness allowance (that is to say, all cash payments by whatever name called paid to an employee on account of a rise in the cost of living), house-rent allowance, overtime allowance, bonus, commission or any other similar allowance payable to the employee in respect of his employment or of work done in such employment; (iii) any presents made by the employer;”

“Section 6: Contributions and matters which may be provided for in Schemes. The contribution which shall be paid by the employer to the Fund shall be ten percent. Of the basic wages, dearness allowance and retaining allowance, if any, for the time being payable to each of the employees whether employed by him directly or by or through a contractor, and the employees’ contribution shall be equal to the contribution payable by the employer in respect of him and may, if  any employee so desires, be an amount exceeding ten percent of his basic wages, dearness allowance and retaining allowance if any, subject to the condition that the employer shall not be under an obligation to pay any contribution over and above his contribution payable under this section: Provided that in its application to any establishment or class of establishments which the Central Government, after making such inquiry as it deems fit, may, by notification in the Official Gazette specify, this section shall be subject to the modification that for the words “ten percent”, at both the places where they occur, the words “12 percent” shall be substituted: Provided further that where the amount of any contribution payable under this Act involves a fraction of a rupee, the Scheme may provide for rounding off of such fraction to the nearest rupee, half of a rupee, or quarter of a rupee.

Explanation I – For the purposes of this section dearness allowance shall be deemed to include also the cash value of any food concession allowed to the employee.

Explanation II. – For the purposes of this section, “retaining allowance” means allowance payable for the time being to an employee of any factory or other establishment during any period in which the establishment is not working, for retaining his services.”

Based on the above two definition under Section 2(b) & section 6 if we read it clearly it says some allowances/components/amounts have been expressly excluded for making payment of PF contributions. The list of expressly excluded allowances are house-rent allowance, overtime allowance, bonus, commission or any other similar allowance payable to the employee in respect of his employment or of work done in such employment and any presents made by the employer


At least, after this... takes effect, PF contributions are to be remitted on the monthly pay of the employees.
Ø  ‘Pay’ includes Basic Wages, DA (including cash value of food concessions) and Retaining Allowance, if any.
Ø  ‘Basic Wages’ means not merely the one component which is named so but includes all the components except HRA, OT allowance, Bonus, commission and any other similar nature of allowance (For example, the transport / conveyance allowance, special allowance, washing allowance, attendance incentive, night shift incentive, educational allowance, City Compensatory Allowance, Misc. Allowance, other allowance, etc., which are paid regularly are held to be ‘basic wages’ by the MP and Madras High Courts).

There is no law which prescribes any specific salary structure for any type of industry or company. There is also no mandatory component but for ‘basic salary’. Therefore, it is for the management to derive a salary structure for its employees. The number of components, one company can determine through contract of employment.

Since all the components in the name of Allowances except Basic wages, Dearness Allowance as ‘filler’, in the strict legal sense, it will be treated either as basic salary or as dearness allowance. Hence, this should be reckoned for PF because it is the nature (purpose) of payment which matters most and not the nomenclature.

Allowances should be fixed on a contingent basis and compensatory in nature otherwise, these will be treated as basic wages. The main crux of the judgment, especially for allowance, is extracted here as under para;
“A compensatory allowance broadly falls into three categories;
Ø  allowance to meet the high cost of living in certain, especially costly cities and other local areas;
Ø  allowance to compensate for the hardship of service in certain areas, e.g. areas which have a bad climate and/or difficult to access; and
Ø  (iii)allowances granted in areas, e.g. field service areas, where, because of special conditions of living or service, an employee cannot, besides other disadvantages, have his family with him. There may be cases in which more than one of these conditions for grant of compensatory allowance is fulfilled”.

Example: Management should be in a position to establish that this payment goes towards conveyance (The clear written policy should be available on the purpose for which the payment is made. The conveyance allowance should not be paid for holidays, leaves or absence from duty). If done, this component need not be considered for ESI, PF, Bonus, and gratuity. If conveyance allowance is paid to all employees without any proof in respect thereof this will unsustainable.

If this is paid as filler’ in order to meet out the Cost to the Company (So-called ‘CTC’), in the strict legal sense, it could be treated as basic salary. Hence this should be reckoned for PF contribution.

But the purpose of paying these allowances are clearly established, this need not be reckoned for PF.

In case the monthly pay for determining PF contributions exceed Rs. 15000/-, the same can be restricted to Rs 15000/-. If the establishment has been already contributing without so restricting, the same can be continued. If it is decided to restrict it to Rs 15000/- now, it can be done with the concurrence of the RPFC concerned in accordance with the case law Marathwada Gramin Bank Karmachari Sanghatana and another Vs Management of Marathwada Gramin Bank and others, SC, 9 Sep 2011 (Sec 12 will not get attracted)

In a nutshell, Salary structuring is to be done only with Pay but it is not with Allowances!!!