The Government of India has finally implemented the decision of increasing the maximum sum limit assured under insurance scheme of retirement fund body Employee Provident Fund Organisation, popularly termed as EPFO, to 6 lakh rupees. This would almost double the maximum sum for its 4 crore subscribers.
The decision was, however, taken long back in September by the apex decision-making body Central Board of Trustees (CBT) of EPFO. The decision was to increase the benefits from 3.6 lakh rupees to 6 lakh rupees under the Employees’ Deposit Linked Insurance (EDLI). But the decision was not enforced by the Labour Ministry of India, as the decision was stuck with the Indian Lay Ministry for getting an approval.
Necessary Gazetted copy click below
EDLI_AmendmentScheme
Posted by Prakash Consultancy Services at 18:31 No comments:


In the G.O 1ST read above , the Industries and Commerce (P&I) Department
have issued orders on Andhra Pradesh retail trade policy 2015-20, focusing
simplification of labour laws & processes, skill development support and single desk clearances, so as to stimulate growth in the Retail Sector for a period of 5 years from the date of notification.

Pls click the below link for the above said Notification

Posted by Prakash Consultancy Services at 16:10 No comments:

In addition to the Basic Pay fixed by the Administration of Daman & Diu in respect of all the scheduled employments under the Minimum Wages Act, 1948 vide notification No.LE/LI/DMN/MWA-3(II)/2015-16/81 dated 29.05.2015, the daily rate of Variable Dearness Allowance (VDA) payable on the cost of living index number is increased at the rate of L 9.50/- with effect from 01.04.2016.

Detail circular is enclosed below pls click the link below

Under the scheme of deduction of tax at source as provided in the Act, every person responsible for payment of any specified sum to any person is required to deduct tax at source at the prescribed rate and deposit it with the Central Government within specified time. However, no deduction is required to be made if the payments do not exceed prescribed threshold limit.

Table 3: Increase in threshold limit of deduction of tax at source on various payments mentioned in the relevant sections of the Act -

Table-4 : Revision in rates of deduction of tax at source on various payments mentioned in the relevant sections of the Act:
The following provisions which are not in operation are proposed to be omitted as detailed in Table 5.
Table 5: Certain non-operational provisions to be omitted
These amendments will take effect from 1st June, 2016.

@courtesy http://taxguru.in/income-tax/
-
Posted by Prakash Consultancy Services at 23:46 No comments:

Many employees forget to transfer the balance from their previous provident fund (PF) accounts when they change jobs. Some of them even withdraw the money from PF account. Since PF is meant for one's retirement years, financial experts suggest that the accumulated savings should not be withdrawn during one's working years. To encourage employees consolidate multiple accounts, Employees' Provident Fund Organisation (EPFO) has launched a special drive called "One Employee-One EPF Account" 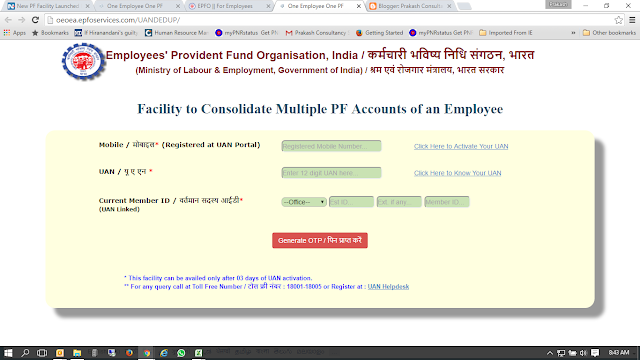 Posted by Prakash Consultancy Services at 08:58 No comments:

Key amendments in the notification
Under the EPS, a new provision under sub-paragraph (7B) of paragraph 12 has been inserted enabling the following benefits:

A member may opt to continue contributions under EPS till the age of 60 years if the employment is continued. Earlier the contribution was stopped at the age of 58 years.

New changes in the EPS can help members draw higher pensions by way of deferment of pension and/or by contributing to the EPS till the age of 60 years. This move by the government can help improve the pension adequacy for EPS members. This is a voluntary provision that can be availed by EPS members at their own option. Further guidelines are expected from Employees’ Provident
Fund Organisation to implement the new changes in EPS.

EPS Raised age limit under pension scheme from 58 to 60

Posted by Prakash Consultancy Services at 13:34 No comments:

Greeting workers on International Workers Day with the.
Sh. Bandaru Dattatreya, the Union Minister for Labour & Employment (Independent Charge) launched a special Mission consolidation drive “One Employee-One EPF Account” for members of the EPFO.
Sh. Bandaru Dattatreya, on the occasion stated that in the recent past, EPFO has taken several IT based initiatives to provide convenient and efficient services to its stakeholders. The initiative of launching the Mission consolidation “One Member One EPF Account” is a step towards encouraging EPF members to access enhanced IT enabled services through UAN accounts that are linked with Aadhaar.
Sh. Dattatreya also informed this drive, would result in EPF members having just one EPF account and multiple conveniences. The Universal Account Number that is Aadhar seeded will consolidate multiple past service accounts, across various spells of employment during working life of an EPF member.
Sh. Shankar Aggarwal, Secretary (Labour & Employment) elaborated that the EPF member would be requested to provide all his earlier EPF accounts along with his UAN linked account, Member ID and registered Mobile Number. And EPFO would facilitate the transfer of all these accounts into his present account. Instructions have been issued to establishments that in case any new employee joins an establishment, they may furnish, UAN, if any, allotted to the member earlier, or declare that s/he is becoming a PF member for the first time.
Dr. V.P. Joy, Central Provident Fund Commissioner added that the success of this drive would reduce not only the burden of members but would also result in ease of work for EPF employees. Similar to other IT initiatives taken by EPFO that have brought transparency and efficiency in the working of EPFO, the success of this drive would further strengthen the bond between EPFO and EPF members. By the end of April 2016, UAN has been issued to some 67716584 members
To educate workers and strengthen the cause of social security, EPFO today launches a special drive to encourage EPF members to consolidate their multiple accounts. The members whose accounts are scattered face many inconveniences such as approaching multiple employers located at multiple locations for settlement of claims. They also face the inconvenience of keeping record of multiple scheme certificates issued in the process. To know about the updated EPF balances, they need to approach multiple offices. With consolidation, a member can have complete control of his EPF account apart from accessing variety of IT enabled services such as email/sms alerts, access to e-pass book etc.
EPFO has been advising members to link all their PF account numbers with the UAN and to also seed KYC data against their UAN number. Aadhaar has been uploaded against 1.30 crore UAN, out of which 1.03 crore Aadhaar have been digitally authenticated by the establishments. The establishments are advised to upload and then digitally authenticate the KYC information. KYC primarily means Aadhaar, PAN and Bank Account. With the enactment of Aadhaar Act, 2016 (26thMarch 2016), EPFO is now seeking to make Aadhaar, the primary identifier. Members having Aadhaarseeded UAN, saves the inconvenience of claims forms attestation by the employers.
Explaining the benefits of integration of members’ multiple PF accounts Dr. Joy said that consolidated accounts enable continuance of lifelong PF membership, and allow PF, pension and insurance benefits on combined service. Today, large number of members are unaware of Pension benefits that can come through consolidation, defeating the very soul of the EPF legislation. EPFO therefore seeks to encourage members to continue their PF membership by offering increasingly better services and ease of convenience. Larger aim is to help members to upgrade their quantum and variety of benefits being offered by EPFO.
In order to boost the process of seeding the Universal Account Number (UAN) with KYC, an “Incentive Scheme” has been launched for the employers. Under this scheme a claim refund of upto10% of administrative charges payable to EPFO can be claimed upon completing specified tasks (furnishing member information and digitally authenticated KYC details).    The Scheme shall be in operation for one year, beginning 1st January 2016 to 31st December, 2016
This drive will run for one year.  During this drive following actions will be taken by EPFO:
·                     Run a Publicity campaign at regular intervals in Print, electronic and digital media
·                    A software has been launched today for centralized processing that will transfer and consolidate accounts  with ease.
Features of the software are:
·                A member has to provide his current activated UAN along with the current member ID & Mobile number registered at UAN Member portal.

·                The earlier PF member IDs provided by members will be forwarded to EPFO field office to which earlier member ID pertains. The information provided to field offices will also include current member ID & Mobile number of the member, so that the members can be contacted and facilitated to consolidate his previous EPF Accounts to the Current EPF Account.

·                 Wide publicity will be given to make use of “Inoperative Help Desk” that helps an EPF member to integrate/ settle such accounts.
·                     An electronic de-duplication process to be carried out by EPFO.
·                     “EPFO-E-samkisha” software that is launched to be used for         monitoring and implementation of the programme.
Features of E samiksha software are:
·         EPFO e-Samiksha is a real time, online system for follow-up action on the decisions taken.
·         The follow up action will be required to be updated by the offices continuously and the status can be viewed centrally.
·         Business divisions and the field offices can securely access the system through a log-in/password.
·         This system can also be configured to review the follow up actions in respect of other meetings, if require.